Our mission is to deliver seamless, secure, reliable products to provide more profitable business solutions. We are continuing our efforts to achieve more progress on this goal.

Start with our product wasn't easy but we took from that times many oportunities and got new experiences. Which we now really need for our big goals. We plan get into world market and sell it to everyone. In this time we will big company well-know brand and our products will make world better.

Read the latest news of our company.

Cash point raiders net up to £100,000 after blowing up machine in new 'gas attack' craze

The robbers targeted a Barclays bank in Lancashire using a gas canister to explode the ATM - a technique used by criminals elsewhere in Europe.

Cash point raiders net up to £100,000 after blowing up machine in new 'gas attack' craze

RRaiders made off with up to £100,000 after blowing a cash machine using a new technique favoured by gangs in mainland Europe. The robbers targeted a Barclays Bank in Burnley, Lancs, in a so-called "ATM gas attack". Gangs have been using the system in mainland Europe for several years, but it is still relatively new to Britain. It involves inserting a tube into the cash dispenser, flooding it with a combustible gas from a canister, then activating a trigger device. Police have been trying to establish whether CCTV evidence was available of the incident in the early hours of Sunday.

Witnesses saw three men driving off from the scene in an estate vehicle, possibly an Audi. Insp John Fryer of Burnley Police, said: "It was a massive explosion and has done a lot of damage. "This is quite a new phenomenon in the last 12 months or so and is becoming more and more common. It's quite worrying that we've now had one in Burnley as it means there could be people operating in this area now." He said the explosion was only supposed to blow a front section of the machine open, to allow access to the cash containers, but the raiders used 'way too much gas'. The back of the machine also blew apart, as well as the glass door to the branch. Police could not confirm how much money was stolen after the early morning explosion at Barclays Bank, on Colne Road, yesterday but the machine is thought to hold up to £100,000. One neighbouring shop worker, who asked not to be named, said: "It probably wasn't anyone local. "It seems like they've planned it out but it's worrying that things like this are happening. It's not good for anyone."

John Morini, who works at Deborah Jane's Sandwich Bar next door, said: "We've been here for seven years and things like this don't worry us. "Nearly every building has been broken into down here." Police said no-one appeared to have been hurt in the incident, although council officers were at the scene yesterday to check for any damage to the building. A spokesman for Barclays said: "We are aware of the incident and will cooperate fully with the police inquiry." Det Insp Nick Hodgeson, of Burnley Police, said: "We are in the early stages of this inquiry and I would appeal for anyone who witnessed anything suspicious in the area at the time or anyone who has any information to get in touch." 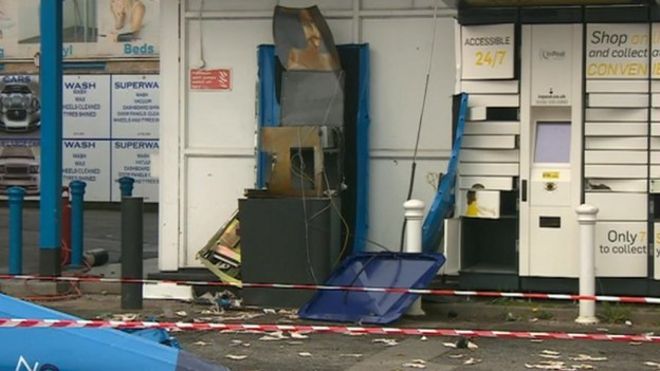 A petrol station cash machine in Bristol has been "blown up", the second to be attacked in as many months.

A petrol station cash machine in Bristol has been "blown up", the second to be attacked in as many months.

Police were called to the dispenser at the Texaco garage on the A420, Bell Hill Road in St George, at 03:10 BST, after reports of a "loud bang". In April a machine on Hartcliffe Way was targeted, leaving £10 notes scattered across the forecourt. A police spokeswoman said it was "too early to tell" if the two incidents were linked. She confirmed that the petrol station was closed at the time of the incident and no money was stolen. Eyewitness Charlie Roach, who was asleep at the time, said: "At about 3:15am there was an almighty bang, which I thought - when I looked out the window - had been a car accident. "There appeared to be something in the road. Within a couple of minutes the police arrived and they had the road shut off. There were about four or five cars here for an hour or so.

Mr Roach said someone "had a go" at the cash machine a year or two previously but it had been "reinforced" since then. BBC Radio Bristol's Nigel Dando, who went to the petrol station, said: "It appears as if the cash machine has been attacked and blown up." He added the explosion had caused "substantial damage" and left a "charred, twisted mess". Anyone with information has been asked to contact police.

The man who invented the cash machine

"They're clever scoundrels," fumes John Shepherd-Barron at his remote farmhouse in northern Scotland. He is referring to the seals which are raiding his salmon farm and stealing fish..

The man who invented the cash machine

"They're clever scoundrels," fumes John Shepherd-Barron at his remote farmhouse in northern Scotland. He is referring to the seals which are raiding his salmon farm and stealing fish. 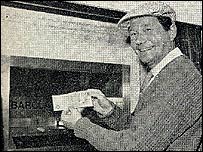 "I invented a device to scare them off by playing the sound of killer whales, but it's ended up only attracting them more." But failure with this device is in contrast to the success of his first and greatest invention: the cash machine. The world's first ATM was installed in a branch of Barclays in Enfield, north London, 40 years ago this week. Reg Varney, from the television series On the Buses, was the first to withdraw cash. Inspiration had struck Mr Shepherd-Barron, now 82, while he was in the bath. "It struck me there must be a way I could get my own money, anywhere in the world or the UK. I hit upon the idea of a chocolate bar dispenser, but replacing chocolate with cash." Barclays was convinced immediately. Over a pink gin, the then chief executive signed a hurried contract with Mr Shepherd-Barron, who at the time worked for the printing firm De La Rue.
Teething troubles
Plastic cards had not been invented, so Mr Shepherd-Barron's machine used cheques that were impregnated with carbon 14, a mildly radioactive substance. The machine detected it, then matched the cheque against a Pin number.However, Mr Shepherd-Barron denies there were any health concerns: "I later worked out you would have to eat 136,000 such cheques for it to have any effect on you." The machine paid out a maximum of £10 a time. "But that was regarded then as quite enough for a wild weekend," he says. To start with, not everything went smoothly. The first machines were vandalised, and one that was installed in Zurich in Switzerland began to malfunction mysteriously. It was later discovered that the wires from two intersecting tramlines nearby were sparking and interfering with the mechanism. One by-product of inventing the first cash machine was the concept of the Pin number. Mr Shepherd-Barron came up with the idea when he realised that he could remember his six-figure army number. But he decided to check that with his wife, Caroline. "Over the kitchen table, she said she could only remember four figures, so because of her, four figures became the world standard," he laughs.
End of cash?
Customers using the cash machine at Barclays in Enfield High Street are mostly unaware of its historical significance. A small plaque was placed there on the 25th anniversary, but few people notice it. Given that there are now more than 1.6 million cash machines worldwide, it is a classic case of British understatement.Mr Shepherd-Barron says he and his wife realised the importance of his invention only when they visited Chiang Mai in northern Thailand. They watched a farmer arriving on a bullock cart, who removed his wide-brimmed hat to use the cash machine. "It was the first evidence to me that we'd changed the world," he says. But even though he invented the machine, Mr Shepherd-Barron believes its use in future will be very different. He predicts that our society will no longer be using cash within a few years. "Money costs money to transport. I am therefore predicting the demise of cash within three to five years." He believes fervently that we will soon be swiping our mobile phones at till points, even for small transactions. At 82, Mr Shepherd-Barron is very much alive to new ideas and inventions - even though his device that plays killer whale noises still needs a little bit of tinkering.

Feel free to contact us, we will advise you and we will find together the right choice for you!